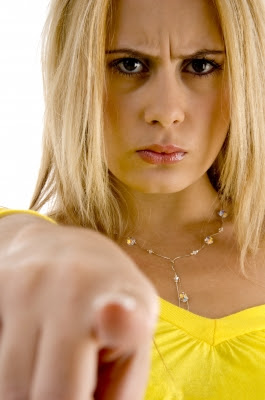 Women are complicated. Sometimes they're unfathomable. Despite a relationship spanning over 34 years, I cannot yet claim to understand the mind of Mrs Jones. But I have learnt a few things along the way – how else would I have survived? – and I’d  like to share them for the benefit of other men out there who might be even more perplexed than I am about the female psyche.


With regards to her body shape and appearance, a lady will never ask a question of her man unless she has already identified the response she wants to hear. Consequently, such questions strike pulsating terror into the bowels of any male. We know there is a ‘correct’ answer that, if delivered promptly and with sincerity, could later be rewarded with an assortment of sexual favours. But get it wrong and punishment awaits, ranging from icy silences to physical assaults.


So gentleman, here is my guide to how to (and how not to) respond to six common questions from our partners. If you’re masochistic enough to offer response 1, brace yourself for punishment of a type that would have seemed gruesome in the dark ages. Offer a response 2 and expect to spend at least the next 24 hours in social isolation during which she will emit only one-syllable replies to your attempts to initiate conversation. But get it right with a response 3 and you could be creasing the sheets while entwined in the limbs of a passionate woman (that is, your partner).


Question: Which of these two dresses should I wear at the restaurant tonight? (asked while trying them on)


RESPONSE 3: ‘You look great in both; they each show off your figure, but I think the red one just edges it’

Question: Do you think my bingo wings are disappearing? (while tugging the flabby bits on her upper arms)


RESPONSE 1: ‘No, but all women your age have bingo wings. And now I come to think of it, even the pretty lass next door has them, and she’s a lot younger than you’


RESPONSE 2: ‘They’re getting there’


RESPONSE 3: ‘I can’t say I’ve ever noticed them; your arms always look slender and elegant to me’

Question: My boobs are getting really floppy; don’t you find them a big turn off?


RESPONSE 1: ‘Yes. They’re like two blubber-filled hammocks in a gale’


RESPONSE 3: ‘I love your boobs; what man wouldn’t? Soft and natural and so much better than those plastic ones that some models flash across the newspapers’

Question: Does my butt look big in these jeans?


RESPONSE 1: ‘Of course it does; I didn’t nickname you “bacon arse” for nothing!’


RESPONSE 3: ‘No way! It looks firm and pert. In fact it’s taking all my willpower not to caress it’

Question: Doesn’t that bracelet look gorgeous? (while gazing into a jeweller’s shop window)


RESPONSE 1: ‘Give me strength! At that price we should be living in it, never mind wearing it’


RESPONSE 3: ‘It would look fantastic on you. If only we could muster the funds to buy it’ (buy it later that day and surprise her)

Question: Do you think I’m losing weight? (while standing in front of a full-length mirror)


RESPONSE 2: ‘I hope not; I like you with a bit of excess poundage’


RESPONSE 3: ‘Without a doubt; you’re shape reminds me of our wedding day’

Image courtesy of imagerymajestic at FreeDigitalPhotos.net