Spewing and sprawling on the Ionian Sea 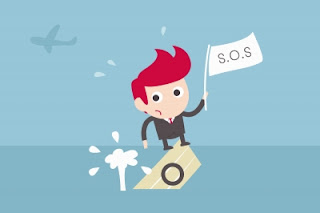 When the captain of a boat sits on his own in the corner, hands over his face, his bowed head shaking from side to side, it is reasonable to suspect that all is not well.


Such was the scene Mrs Jones and I witnessed while on a boat returning to the Greek island of Corfu after a day trip to Albania. We were ensconced, below deck, in the covered area of a pleasure cruiser along with around one hundred other tourists. The Ionian Sea had been choppy since we left the port. Ten minutes into the voyage, and the boat was swinging from side to side like a giant hammock in a gale. At first it was amusing to watch: unoccupied chairs and tables sliding around like a scene from Poltergeist; young men zig-zagging to the toilet, grasping the hands of seated fellow passengers to steady themselves; and an Italian beauty, wearing more makeup than clothing, sliding to the floor and unable to get back up, her long legs akimbo.


From the outset I’d been making eye-contact with an obese, disabled Romanian gentleman sitting directly opposite, leaning forward on his walking stick, our mutual nods and smiles showing smug acceptance of the situation. Two old sea dogs like us were not going to be phased by a bit of choppy water. White foam rendering the windows opaque, as if we were all entombed inside an iceberg, didn’t worry us. Real men, made of sturdy stuff, while lesser mortals floundered. Suddenly, the boat lurched violently to starboard catapulting the 17-stone Romanian towards me; he landed at my feet with a thud.


I, and others, feigned to stand up to help him – if we had, the pendulous swing of the boat would have put us all on our arses – but the prostrate fella oozed calmness and rationality.


‘I’m fine on the floor,’ he said, palm of his hand raised with the authority of a traffic policeman. ‘It’s the best place for me’.


And then the vomiting started. The kids who’d been screeching and running amok on the outward journey were now sat in a line, motionless, their faces displaying various shades of green and yellow. In response to their communal retching, a number of plastic shopping bags had appeared and were now being used to catch the dribbling puke. Some adults with sea sickness – including the two holiday reps – had braved the wobbly walk to the outside deck and were now vomiting over the side, their white-knuckled hands clinging to the rails.


A young man who had been laid horizontal across three seats, apparently sleeping, roused himself. He sat upright, appearing confused. In an instant, perplexity was replaced by horror and he sprung to his feet and made a dash for the toilet, his cheeks puffed out like an inflatable toad. He stumbled, falling in my direction, and for a second we were almost nose-to-nose. I resigned myself to being peppered with a semi-digested Albanian buffet, but – and give the lad his due – like a skilled fighter-plane pilot, he pulled off a last-minute swerve to the right and vomited over my shoulder into a recess behind me.


Mrs Jones and I had remained seated throughout, absorbing the chaos around us: upturned tables and chairs randomly sliding back and forth; a chorus of retching and gurgling; white froth slapping against the windows as if the sea had morphed into a fizzy drink; and a rotund east European lying on his side at our feet, his chin resting on his hand, nonchalantly perusing the mayhem. As the boat continued to veer like a giant swing at a funfair, we had focused on the behaviour of our Greek captain. Oblivious to the stumbling, vomiting passengers, the skipper continually ventured outside onto the exposed deck – the open door letting in a howling gale – returning wet and windswept, only to then repeat the action.


But now the captain had sat down in our midst. I – and I suspect many others – looked to him for reassurance that everything was under control. But we couldn’t see his features: he was slumped, hands over his face, shaking his head from side to side. There was only one conclusion to be drawn: the boat was sinking.


Mrs Jones began texting a farewell message to the kids.


I considered ringing my son to remind him of the cabinet drawer where our will was kept.


My hand started to grope under my seat in search of a life jacket.


And then the horizontal Romanian calmly asked the question we all wanted answered. ‘Captain, is there something wrong with the boat?’


As if wakened from a trance, the captain lifted his head and looked around, perplexed, trying to locate the source of the voice that had intruded into his inner world. It took a few seconds to notice the fixed stare from hulk on the floor and realise this was his interrogator.


Ten minutes later, the sea calmed and we arrived safely in Corfu town.


‘That was horrendous,’ said Mrs Jones as we got off the boat. ‘I thought we were doomed’.