The Health and Safety brigade increasingly frustrate me. I know their aims are worthy in wanting to protect us all from harm, but they can often take things to an absurd extreme. The following examples, all derived from the last decade in the United Kingdom, should serve as illustration:

Prohibiting the throwing of sweets into a pantomime audience;
Banning the playing of conkers in a school playground;
The requirement that all November 5th bonfires be registered with the local council;
Forbidding the provision of pins with Remembrance Day poppies.

Last month at my place of work the Infection Control Nurse became concerned about the state of our departmental fridge. Whereas I’ve always revelled in the recurrent Monday morning kitchen pastime of “find the source of that iffy smell,” Nurse Starchy has a radically different disposition and has insisted that the milk bottle infiltrated by Danish-blue and the banana encrusted with the sticky-black goo of decay present hazards to the health of all employees. As such, it is now company policy for each item left in the fridge to be labelled with the owner’s name along with the date it was put in; the fridge is inspected at the end of each day and any item not duly labelled is thrown away.

The implementation of this policy has led to many mutterings of discontent, particularly among the male workforce. Of course, not one of us has been brave enough to challenge Nurse Starchy – she is a terrifying woman – so our protests have remained covert. Yesterday I discovered that someone, as yet unknown, had pinned the following picture and caption onto the kitchen notice-board. It made me giggle, although I’m not sure what Nurse Starchy will make of it. 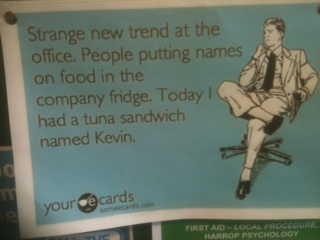 Sexual angst of a 53-year-old man

Mrs Jones and I have been a partnership for 31 years. During our 20s we creased the sheets with lusty regularity, fully immersed in the sensual pleasures of our smooth, lithe bodies. Everything happened naturally, without the need for introspection. This carnal abandon persisted throughout our 30s, albeit less often, the introduction of two children into the family unit acting to restrict opportunities for rumpy-pumpy. Despite the reduced frequency, my sexual performance remained top-notch (even though I say so myself - Mrs Jones might have a different view) apart from the occasional booze-related droop.

Then at some point in my mid-40s that sneaky bastard called Age started to wreak its own rancid brand of mischief. One evening, while stepping out of the shower, Age compelled me to inspect myself in the mirror. Horror! I was no longer a handsome young buck. Facial wrinkles, greying locks and an unwanted fold of skin hanging under the jowls like an over-used hammock provided damning evidence of my demise.

I lingered in front of the mirror, frozen by the creeping realisation of age-related decline. I had sprouted hair in all the wrong places, unsightly bristles spewing out of my nostrils and ears. My chest and abdomen were carpeted by wild, uneven tresses, an increasing proportion being grey; when I stared at my torso the pale bits seemed to spell out the message, “has-been.” There was even a triangular patch at the base of my spine, a kind of dorsal pubic hair.

This sobering realisation of bodily decay began to impair my sexual performance. Rather than being fully immersed in the act of making love, much of my mind was located on the bedroom ceiling, imagining how I would appear to a spectator. Where once I had envisaged smooth, iron-girder buttocks pumping athletically like Brad Pitt’s Achilles in the film Troy, the image in my head now more closely resembled Robbie Coltrane’s Hagrid getting to grips with Madame Maxime in Harry Potter.

And to add to my growing self-consciousness I became obsessed with the size of my manhood. In my younger years I had no anxieties in this department. As a teenager at school in the communal showers after a sporting event I was never the victim of the “tiny todger” jibes, unlike some of my more unfortunate class-mates. I had always assumed I scored in the average range for penile length and, when an occasional doubt intruded into my mind, would reassure myself with the mantra that size doesn’t matter. But now I was increasingly inspecting the size of my genitalia in the mirror, from every angle, but always with the same disappointment. Let’s just say my meat was shrivelling northwards while my two vegetables were heading south!

When I reached that sobering 50-year-old milestone, my declining self-image formed a devastating coalition with my internal physiology (something to do with the blood vessels losing their springiness) to produce an escalating number of sexual failures. All seemed lost. The Jones’s sex life seemed to be on a downward trajectory. That was before I encountered what is, without doubt, the pharmaceutical industry’s most useful contribution to the civilised world: Viagra! But I’ll leave my experiences of taking this drug for a future post.