The circle of life

In February of this year my only son, aged 23, left home. Two
months later my father almost died. So around the time that my child instigated the final phase of his transition to full independence, I nearly lost the man who, for my 55 years of existence, has admirably performed the position of male role-model. It was almost as if Life had decided upon a quid pro quo: if one young man is on the cusp of full autonomy, it is time for one old man to depart.

My 83-year-old dad had been suffering abdominal pain for a few days. Typically a fit and active man who walks his boisterous golden retriever three times per day, when I called round on one of my weekly visits it was sobering to discover that his discomfort had rendered him almost incapable of leaving his bed. Why hadn’t you called me earlier, or (even better) rang for an ambulance, I asked. We didn’t want to make a fuss, my dad and mother replied.

I helped dad into my car and drove straight to the Urgent Care department of our local hospital. During the journey he insisted on telling me the whereabouts of his will and testament – apparently in the bottom drawer of his dining room cabinet, in a green cardboard folder – and asked if I could “keep an eye on” mum (his wife for the last 62 years) should anything happen to him. I smiled and urged him not to be so bloody morbid, while wondering whether the old fella had some sort of intuition that his demise was imminent.

I booked him into Urgent Care, asked the receptionist for a vomit bowl (dad was retching by this time), and emphasized that I believed my father’s condition to be a medical emergency. She instructed us to sit in the waiting area along with about two-dozen other patients, most of whom seemed to be suffering cuts and sprains. Two minutes later my father lost consciousness and slumped across me. Six nurses descended upon us from all directions, lifted my father onto a trolley and rushed him into the resuscitation area; there is nothing more effective than a dramatic collapse to propel one into pole position in a hospital waiting room.

Throughout the afternoon his condition oscillated between apparent improvement and episodes of mental confusion. Various tests and x-rays revealed an obstruction in his bowel; surgery for cancer several years earlier had left scars (“adhesions”) which had caused his intestine to twist like a balloon and cause a complete blockage.

By 8.30 pm, the medical specialists decided they would have to operate immediately. Although not explicitly stated, the indications were that we should prepare for his demise: the senior consultant surgeon was called to perform the operation; she insisted on speaking to me and mum beforehand to emphasize the seriousness of the situation; and we were led to the Faith Room to await the outcome of what they anticipated to be a three-hour procedure.

Alone in the Faith Room, mum and I sat in front of a broad bare window, allowing a view of both the lights of the nearby town on one side, and the sun sinking below the bleak Lancashire hills on the other. At first, we did not speak. I stared into the gloom outside, striving to comprehend the prospect of losing my dad, while (I suspect) mum quietly prayed to her God.

I remembered that I had not updated my only sibling about our father’s deterioration, so I rang him on my mobile and outlined the events of the day.
“I think we might lose him, Tony” I said at last, tears escaping for the first time at my explicit acknowledgment of the likely outcome.

When I returned to sit with my mum the quality of our togetherness seemed to have changed following my acceptance of the possibility of the big man’s death. We talked with a depth of familiarity only close family members can share. We laughed together as we reminded each other of family holidays, including the time he insisted on carrying both huge suitcases into the hotel only to become wedged in the swing- doors. We reflected on some of his foibles – how he doted on his dogs, his unintentional heavy-handedness with his grandchildren when wrestling with them on the carpet, and his habit of grasping stinging nettles with his bare hands to eject them from his garden – as we shared an unfamiliar intimacy, I wondered why mum and I didn’t make time to share this closeness more often.

My father survived. The bowel operation was a success and, after four weeks in hospital (two in intensive care) he was discharged home on the 12th May. Ten weeks later he continues to improve, although he remains 30-pounds lighter than his pre-operative weight and his mobility is currently restricted to short, tentative walks with his dog!

During the crisis I glimpsed the gut-wrenching prospect of losing my dad, the unique quality of love that binds family members, and the circle of life whereby our children mature into full adulthood while our parents edge ever nearer to oblivion. Intriguingly, my visits to mum and dad have now increased to twice per week.

At 55, I am meandering into the stage of life where the finishing post is beckoning on the horizon, hopefully some distance away but definitely within view. As I shuffle ever closer to oblivion, there is growing awareness of events that might catapult me to the end point ahead of the older runners in front of me. One such issue relates to the prospect of a serious illness.

I’ve been aware of the two brownish lumps on my skin for at least three years; in all likelihood these moles will have been my companions for much, much longer but I’ve paid no attention to them. But recently I’ve been submitting them to daily inspections in the mirror. The larger one is about one centimetre in diameter, located on the side of my face. The other is narrower but slightly raised, bravely lurking among the undergrowth of my abdominal hair.

Armed with the partial knowledge accrued from Google searches for “melanoma” and “skin cancer”, I’d detected ominous signs that both my blemishes were two-tone and the one on my gut had a crusty top, with a blood droplets oozing from beneath it. I decided to get them checked out.

Having not visited my local doctor for several years, I was initially impressed to find that he had apparently embraced the technological age. I booked an early appointment online and, when I arrived at his surgery, I registered my presence via the touch-screen, thereby helpfully avoiding any interaction with the medical receptionists (or “bulldogs” as they are known locally). Within minutes, “MR BRYAN JONES” flashed up on the big screen, instructing me to make my way to the doctor’s consulting room.

I knocked and entered. The doc, a mountain of a man with chunky spectacles, hands the size of frying pans, and an enormous belly straining at the lower buttons of his polyester white shirt, did not look up, his eyes (magnified three-fold) remaining fixed on his computer screen.

“What can I do for you, Mr Jones” he asked, head still bowed, his voice betraying the boredom of routine medical practice.
“I’ve a couple of skin aberrations I’d like you to check.” (I always use big words when speaking to doctors to try and counter feelings of inferiority).
The description of my complaint seemed to ignite his interest. "Let me have a look” he said, springing to his feet and prising under-sized latex gloves over his bulbous fingers.

I pointed out the location of the moles. His eyes flitted between my face and my exposed belly, as if he couldn’t quite decide which interloper to confront first. He then swooped to inspect my abdominal savannah and prodded it with his forefinger.
“That’s just a pimple” he said, his voice tinged with disappointment. He then proceeded to pinch the mole between his thumb and digit and, in one swift movement, ripped off the crusty scab.
I whimpered, like a whipped puppy.
“Did it hurt?” he asked.
“A tad.”
“It’s bleeding a bit” said the doc, apparently surprised, “I’ll cauterize it with silver nitrate.”
That must be a sophisticated medical procedure, I thought. Wrong! The doctor pulled out an implement that resembled a large spent match and then pressed the hot, blackened end into my pimple. The bleeding stopped, the skin around darkened with a ragged sooty deposit.
“As for the one on your face, I’ll need to remove that under local anaesthetic in my minor surgery clinic and send a bit off for analysis. I’ll book you in.”

Subsequently, I’ve fantasised about my doctor’s minor surgery technique. I’m tormented by a recurring image of a hatchet-wielding crack-addict in an abattoir. I maybe a 55-year-old hypochondriac but I’m still vain; the mutilation of my Richard- Gere, baby-face features is not a welcome prospect. I think I’ll risk the cancer. 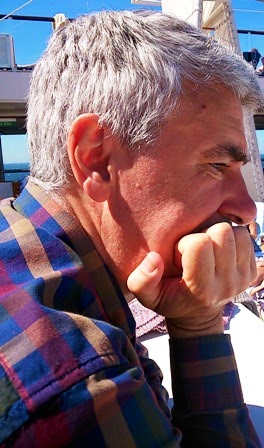 I admired you from afar. Your loveliness,  splendor, inner confidence all nourished me as I longed, unnoticed, from an inferior point in the room. Your proximity froze my breath, evoked an urge to swallow and rendered me wordless. Through the years, we met - again and again – albeit briefly; as acquaintances, as colleagues, as two among many, when we’d nod, smile, and I’d perform, again the role of indifferent bystander.

I played it safe, remained aloof, pride shielding me from the savage slash of rejection.

Three decades on, we occasionally meet and we nod and smile. Two contented people with separate lives, shared with loving partners. Two people harboring a plethora of life’s indentations – joys, achievements, losses, failures – that will forever remain hidden from the other.  But tell me, what if I’d asked? What if I’d risked? What if I’d plunged in and expressed my yearning?