The zipper that wouldn't budge 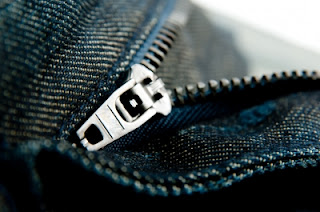 Two weeks ago, Mrs Jones and I attended the evening wedding reception of a friend’s daughter. Such events always provide a valid excuse for dusting off the glad rags and slipping into our favourite outfits. On this occasion I opted for my buttock-hugging royal-blue slacks, providing firm hold around the nether regions and an arse shape that screams ‘squeeze me’ to the ladies in the vicinity.


‘Not bad at all for someone nearly 60’, I muttered as I admired myself in the bedroom mirror prior to departure for the venue, an upmarket country hotel.


Two hours into the event, and four pints of cask ale imbibed, I needed my first pee of the evening. The toilets were opulent, all tiles and gleaming porcelain, the pedestal basins adorned with a variety of scented hand washes. I was the only one there, unexpected given that the occasion was well attended. I approached the urinal and pulled on my zipper; it wouldn’t budge. I tugged harder, several times, but it refused to go south.


Standing there, shoulders hunched, I inspected my groin in search of the source of the obstruction. Drops of perspiration appeared on my forehead. As tends to happen in such situations, the awareness of being denied the opportunity to urinate was making the desire to do so more urgent. In anticipation of the embarrassment should someone enter the toilet, I moved into a cubicle so as to permit a more thorough intra-trouser exploration. With one hand on my zipper, and the other down the front of a (very tight) waistband, I pulled and yanked in a to-and-fro motion, an action that might have been open to misinterpretation if  observed by a third party. But all to no avail; the zipper refused to move, as if welded shut.


The fumblings of the hand down the front of my trousers – already growing numb through the lack of blood supply – had identified the problem: a flap of material near the fly hole that had entwined with the zipper along its full length. With increasing desperation, I reviewed my options. Perhaps I should call Mrs Jones on her cell phone, requesting she comes to my aid armed with a pair of scissors? (An option I quickly dismissed, on the basis that she would only piss herself – excuse the pun – laughing).


As my desperation escalated, catastrophic images pushed into my mind:


Wedding guests pointing at my gusset and shrieking in disgust as my trousers morph into two-tone, a deeper shade of navy extending in waves from the abdomen.


Firemen armed with heavy-duty cutting equipment rushing into the hotel to free me from my contour-hugging slacks.


Lying prostrate on the table among the Singer sowing machines at the local textile factory as the seamstresses debate how best to unpick the stitching. (Or maybe that was a fantasy rather than a catastrophic image?)


Mercifully, after a 10-minutes ordeal – one that felt like an age - my repeated tugging released the zipper and I was able to relieve myself in the appropriate receptacle. (Is there any human experience more pleasurable than emptying a full bladder after a period of inhibition?).

And the next time I wear my favourite blue slacks, I will replace vanity with practicality, focusing on that rogue flap of material under the zip rather than the shape of my arse.


Image courtesy of hin255 at FreeDigitalPhotos.net