The day they arrested my dad 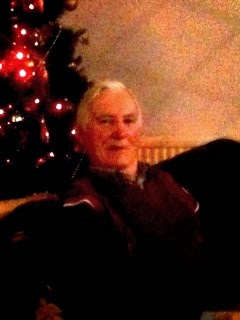 Last Saturday I attended a football (soccer) match with my 82-year-old father. I remain unsure as to the trigger – maybe a gesture or a comment –but while sitting together in the main stand, I relived an incident from almost half a century ago when my gentle, fair-minded dad evoked the wrath of the local police force.


On a Saturday afternoon forty-seven years ago, the rain pummelled the window pane as I perched on the sill waiting for my dad’s return from work. The previous evening he had suggested we attend a football game and now, barely an hour prior to kick-off, he had yet to arrive.

My dad laboured all week in the engineering factory at the end of our road. To boost his take-home pay, he would often work Saturday mornings as well so as to benefit from the time-and-a-half hourly pay rate. When he clocked off at 12 noon he and his work mates would head for the Rose-and-Crown pub to imbibe a ‘bit of throat lubricant’. As I loitered at the window at 2.00 pm on this watery Saturday afternoon, I visualised him standing at the bar, tankard in hand, oblivious to his commitment to escort his 8-year-old son to the football.

His invite to attend a game together had startled me. Burnley, the team we (and several generations of Jones) supported were playing 250 miles away on the south coast, so we wouldn’t entertain travelling on such a pilgrimage. It would have to be a visit to our local (and bitterest) rival Blackburn Rovers. Nor did I usually go to the football with my dad, my companions being either my older brother or my uncle. Maybe my dad’s invitation had been fuelled by guilt at his perceived failure to fulfil his fatherly duties.

At 2.15 a car pulled up outside; my dad had persuaded a work mate to drop us at the ground. Climbing into the back seat of the Ford Corsair, I caught a whiff of alcohol, thereby confirming my earlier hunch of their pre-match stop at the Rose-and-Crown. As we queued to enter the ground of our loathed adversary, torrential rain lashed into our faces. My dad handed over his hard-earned cash at the turnstile and we found our seats in the stand. The pitch itself, clad in a collage of water-pools of various shapes and sizes, appeared unplayable. Yet at 3.00 pm the referee blew his whistle to start the proceedings. At 3.03 pm he blew it again to abandon the game due to the water-logged pitch.

My dad, with me clinging to his arm, strode immediately to the ticket office to seek a refund of his money only to be informed that, as the match had started, no reimbursement would be given. An agitated crowd gathered outside the ticket office, demanding that the directors of the club leave their plush boardroom and explain why they can’t have their money back.

My father is a peaceful man, but on that day he transformed. Maybe due to alcohol- powered disinhibition. Or the frustration of a premature abortion of a rare football trip with his son. Or the fact that heinous Blackburn was responsible for the gross injustice. Whatever the reason, maybe a combination of them all, my dad (together with his clinging 8-year-old son) gravitated to the front of the baying mob.

‘I’m going nowhere until I get my money back’ said my dad.

The officer put a guiding arm on my dad’s shoulder. ‘Come, come now; you don’t want to set your lad a bad example, do you?’

Patronising comments now an additional factor in the already incendiary mix, dad shoved the policeman away. The crowd, some yards further back, cheered at his defiance, thereby providing further encouragement to continue with what was, by now, a one man protest.

The police superintendent appeared. ‘Move on or you will be arrested.’

My dad leaned in towards the superintendent, wagged a finger at the stripes on his uniform and said, ‘Just because you’ve got that bird crap on your shoulder doesn’t mean you can tell me what to do.’

But it did. The police yanked my dad (together with me, his appendage) into the back of the police car. He avoided a night in the cells (probably due to the presence of a minor) but received a fine of £10 for ‘disturbing the peace’.

On the bus journey home, my father pleaded with me not to tell my mother (who would have, no doubt, castrated him for his hooliganism). A loyal son, I didn’t grass him up; well, at least not until a decade later!  And now, almost fifty years on, I’m announcing his aberration to the world.