I'd rather be poisoned! 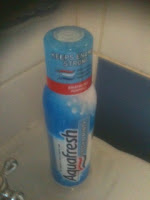 Picture the scene. Late for work, keen to leave the house and almost all self-care tasks completed, I skip (rather nimbly) up the stairs intent on a quick teeth-clean only to find there is no toothpaste. Returning downstairs I collect the new “pump action” tube only to be confronted by that increasingly common source of modern day frustration, impregnable packaging.

My initial attempt to twist off the large transparent cap makes no impression. Further inspection of the reason for this inertia reveals that the whole tube, from cap to base, is trussed in a synthetic strait-jacket. I scan the plastic’s edge for the indentation, the weak point in the ramparts that will allow easy access, only to find that the paler streak in the packaging is just a crease and as unrelenting as the rest of it. My initial, targeted offensive with thumb-nail is to no avail and soon deteriorates into random, frantic (but fruitless) probing.

A combination of teeth, neck muscle and associated growling succeeds in removing the upper slither of polythene, without appreciably taking me any closer to functional access. The subsequent frenzied assault with a kitchen knife loosens a couple more strands of polythene, and nearly costs me a couple of digits, before the defences finally yield. Toothbrush in hand, I pump expectantly only to be further disappointed when no paste escapes from the tube, the nozzle being welded shut by an air-tight seal of silver-paper.

Since, some years ago, an inadequate personality disordered fellow put broken glass (or other similarly noxious substance) in some jars of baby food, the health and safety brigade in collusion with manufacturers’ neuroses about the prospect of future litigation have ensured that a range of everyday items are tamper-proof. Personally, I would prefer to be exposed to the unlikely risk of toxins in my toothpaste rather than the daily frustrations associated with unassailable casing.

A boy will always need his mum!

It was the brightness around the rim of the door that first drew my attention. The landing light, comprising three 100-watt bulbs, had abruptly clicked on sending intrusive white lasers into the darkness of my bedroom. Raising my head a couple of inches from the pillow I squinted to my right at the luminous digital clock on the bedside table; it was 1.05 a.m. and I had been asleep for over two hours. I glanced to my left where Mrs Jones lay, snoring rhythmically, while no doubt dreaming of a steamy liaison with Brad Pitt on the set of the film we had earlier watched, Meet Joe Black. I mused at the lightness of my slumber, in stark contrast to 30 years ago when as a young man I could sleep through the decibels of my mother’s vacuum cleaner as she cleaned around my bed in the middle of the afternoon.

Still holding the duvet under my chin, I strained to hear the nature of the disturbance on the other side of the bedroom door. I could detect faint whimpers, mixed with the occasional expletive. The baritone nature of the noises confirmed that the source was my 21-year-old son. Maybe he was having one of his occasional migraine headaches? Or had he had an i-Phone spat with his girlfriend? Curiosity finally outweighed my inertia, and I got out of bed to investigate.

Ryan was standing on the landing, staring intently into the full-length mirror on the wall, prodding his face with his forefinger. Over 6-feet tall and weighing 13-stone, clad only in silk boxer-shorts, his face red and with droplets of sweat on his brow, he resembled someone who had done 10 rounds with Rocky Marciano.
“It’s driving me crazy” he said, once he’d noticed my presence.
“What’s the problem?” I asked, trying to instil some fatherly concern into my voice.
“There’s a friggin’ eye-lash in my eye. I can see the little bastard but I can’t shift it.”
I peered into his face. Sure enough there it was, a black lash about a half a centimetre long, still attached to his eye-lid but the other end buried in the aqueous mass of his eye-ball. My first reaction was to do what comes naturally to a 53-year old man in the depth of night and in close proximity to the bathroom – I went for a pee. My second reaction was equally instinctive, a response I have demonstrated many times before when one of our children is in pain – I went to rouse Mrs Jones.

As many men will know, waking a sleeping woman is a risky business. Indeed, it can seriously damage your health unless the reason is a house-fire or that one of her babies is in distress. I explained the nature of the current crisis and, once she had recovered from the disappointment of finding that the man mumbling to her in her sleep was me rather than Brad, she heroically swung into action. Armed with an eye-bath, a magnifying glass and two cotton-buds, Mrs Jones marched Ryan into the bathroom. I watched admiringly as she hung Ryan’s head over the sink, instructed him to hold the magnifying glass at the required angle, and doused his eye with a constant stream of warm water while stroking the target lash with the cotton-bud. I was in awe but, not wanting to crowd them, I (thoughtfully) went back to bed.

From the refuge of the bedroom, I could just make out the dialogue between my wife and son as the lash-extraction procedure continued for 20 minutes. Mrs Jones issuing firm but caring instructions, while Ryan responded with whines and the occasional expletive. Then it went quiet. I heard the bathroom door open and as Ryan returned to his room I heard him utter two words, delivered with absolute sincerity and gratitude.
“Thanks mam!”
Moments later, Mrs Jones appeared at the foot of our bed, struggling to contain a self-satisfied smile. “A boy will always need his mum!” she proclaimed.
Begrudgingly, I had to agree. Stifling a pang of envy, I turned over and tried to get back to sleep.

Don't do anything embarrassing

My 18-year old daughter, and youngest child, intends to pursue a degree course in the autumn. Last month there was an open day for Sheffield University (one of the institutions on her short-list) and initially both Mrs Jones and I were intent on accompanying her.
“You’re not both coming,” Becca whined, “I’ll look like a right retard!”
“Well go on your own then, if we’re such an embarrassment” I said, fishing for reassurance that my baby girl might feel a sense of pride at the prospect of having her old man by her side on this foray into alien terrain. She didn’t bite.
“I’m not goin’ on the train; I’ll never find my way from the station.”
As Mrs Jones had a competing commitment (shopping with her mother) on the day in question, I was nominated as chauffeur.
“Is that arrangement to my ladyship’s satisfaction?” I asked, not yet having given up on landing a minnow.
“Yes, thanks; but don’t do anything embarrassing.”

So 7.00 am on a Saturday morning we set off for Sheffield. I had hoped for some quality banter with my second-born on the outward journey, but it was not to be. The previous night Becca had been out with her mates (not just out, but “out out”) and had had no more than three hours sleep. Consequently, she adjusted her passenger seat to almost horizontal and slept. Two hours later I roused her as we drove onto the campus.

As we queued in the refectory to register our arrival, Becca eyed her prospective fellow students (She later informed me she was differentiating the “human from the geeky”). I took the opportunity to point out the future scholars who had brought both parents along and hadn’t, as yet, shrivelled with humiliation.

In a troupe of around 150, we had a guided tour of the university, taking in the sports hall, library, lecture theatres and student accommodation, during which I had a couple of senior moments when my mind travelled back 35 years to my own undergraduate days. Particularly poignant was the sight of an existing student in a hall of residence kitchen; unshaven, hair wild and uncombed, his eye squint suggesting light sensitivity, a tell-tale sign of the previous night’s over-indulgence. Ah, happy days! A period in one’s life when you feel invincible, bullet-proof, immortal – a time when that sneaky bastard called Age has curled up behind you to hibernate, outside of your awareness, for the next quarter of a century.

Following the guided tour we all gathered in a large lecture theatre to hear a talk from the course directors. At Becca’s request, we sat on the back row. We dutifully listened to the reasons why Sheffield is the greatest university in the world. PowerPoint presentation completed, the senior lecturer asked the audience of students and parents whether they had any questions. A parent on the front row asked about what specific topics were covered within the psychology module of the criminology degree. A prospective student (one that would probably fall into the “geek” category of my daughter’s sophisticated classification system) sought as to the possibility of switching in-year from being a straight sociology student to one studying sociology/criminology combined. A mother queried the closeness of the links between the Social Science faculty and potential employers.

Questions duly answered, there was silence in the large lecture theatre as the university academics awaited further queries. I raised my hand. To my right I heard a sharp intake of breath as all the muscles in Becca’s body hardened as if she’d glimpsed Medusa.

“How come there’s no Student Union bar on the campus?”

It was a long drive home.