Tito, my Dalmatian dog, had been agitating for his walk. It was a frozen February afternoon and the roads and pavements were encrusted with ice, the previous week’s snow compressed by foot-fall into an undulating glacier.

A sane option would have been to limit the walk to the end of the road, a five minute jaunt on a flat, non-hazardous track. But no, my dog had abundant energy and my boots had rugged soles so I opted for the usual two-mile circuit. The inevitable happened on a downward slope by the nearby woods. The fall was spectacular; my front foot sped out from under me, my other foot (in trying to compensate) followed suit, propelling me into the air where I seemed to hover parallel to the ground before crash-landing on my back with a sickening thud.

Despite the acute pain radiating from my arse, my foremost anxiety was whether my plummet had been witnessed. As I gingerly lifted myself into a sitting position my humiliation was confirmed, a party of four adults and twice as many children were walking up the slope towards me, concern etched on their faces. I raised my hand to signal I was unharmed. At this moment 70 pounds of excitable Dalmatian leaped over my shoulders, his dangly bits coming to rest against the nape of my neck. Temporally marooned in this straddle position, Tito panicked and instinctively humped the back of my head as if I was a bitch on heat.

I still wonder how those parents explained Tito’s behavior to their offspring.

I am participating in the Dude Write Starting Lineup this week where you can find some excellent posts by bloggers who happen to be dudes: http://dudewrite.blogspot.com) 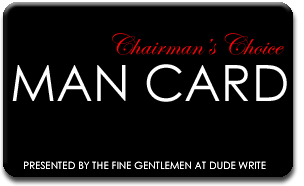 The revenge of Mrs Jones 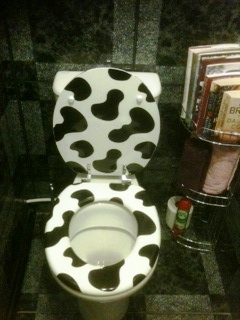 My wife is not a vindictive woman. Well, not usually. But a recent purchase of a toilet-seat allowed Mrs Jones to take retribution for 30 years of frustration.

Throughout our time together she has asked me to put the toilet seat down after I've had a pee. Although I suspect that millions of women across the planet urge their men to perform this simple act, I’ve never been able to understand why. After all, I’m thoughtful enough to always lift the seat before peeing so as to avoid splashes that would condemn Mrs Jones to a wet butt when she uses the loo. So why am I expected to put it down again when I’ve finished? Is it something to do with aesthetics, the bathroom being more pleasing on the eye for future visitors? Or is it because they feel contaminated if they have to touch the toilet seat prior to squatting? The underlying motivation behind her insistence on this piece of lavatory etiquette remains a mystery to me, like multiple other aspects of the female psyche.

After my three decades of non-compliance Mrs Jones has hit back. Last month she bought a new, black-and-white cowhide patterned toilet-seat for our downstairs loo. As I am to D.I.Y. what North Korea is to nuclear disarmament, my wife does all the practical jobs around the house. So, true to form, Mrs Jones fitted the toilet-seat. But an additional tweak of the screwdriver or a calculating twist of the pliers rendered the seat incapable of remaining upright; lift the seat into the vertical position and it totters, like a neurotic on the edge of a high-diving board, before crashing down with a dull thud.

A toilet seat that refuses to stay up presents a conundrum to the peeing male. What approach can be used to channel the stream of urine into the bowl? When faced with this frustration my initial intention was to just piss all over the seat to punish Mrs Jones for her sloppy joinery. But then my self-preservation instinct kicked-in and I quashed that idea.

So what options remained in my attempt to pee through the contracted hole of a seat-down toilet? Well, I could have sat down to urinate like a girlie, the equivalent of Mrs Jones having castrated me, but that would have been conceding defeat. So I tried holding the seat up with my right hand while directing the hose-pipe with my left only to discover that the complex maneuvres of finding, releasing and aiming were too much to execute single-handed, particular when wearing tight underpants devoid of a fly-hole and requiring one to hold down the elasticated waist-band – males will understand the considerable dexterity required to achieve this mission without pissing down your trouser leg.

Creativity was required to overcome this challenge. Next I straddled the toilet bowl, one foot at either side, bent my knees and pushed my willy downwards into a perpendicular position as if operating a pneumatic drill on roadside concrete. Although not the most edifying sight for casual onlookers, this macho straddle-pose seemed to have solved the problem; that is until my knee-ligaments began to give way.

But then success! Seven days of practice at leaning forward without putting my hands on the toilet-cistern, thereby freeing them up for todger-management, enabled me to consistently hit the target while maintaining my masculinity. Picture the Winter Olympics 2010 in Vancouver, and the poise of the ski-jumper in mid-flight, tilting at an angle of 45 degrees, and you will replicate the image of me doing what comes naturally in our downstairs toilet in Lancashire, England.

I am participating in the Dude Write Starting Lineup this week where you can find some excellent posts by bloggers who happen to be dudes: http://dudewrite.blogspot.com)