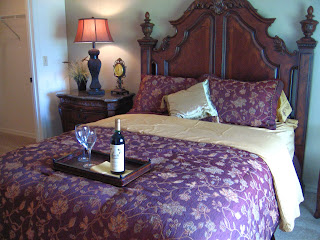 Last month, Mrs Jones and I escaped to the Scottish city of Edinburgh for a romantic weekend and were fortunate enough to stay in the alien surrounds of a plush, 5-star hotel. On our first full day, we trudged around the famous castle and the National Museum of Scotland before devouring a late lunch swilled down with copious quantities of New Zealand Sauvignon Blanc. By 4.00 pm, two enthusiastic sight-seers had transformed into chilled, mellow bohemians sitting in a city-centre pub, me nursing a pint of cask ale, Mrs Jones glugging Bulmer’s pear cider from the bottle-neck.

I thought I detected a mischievous sparkle in my wife’s eye so, emboldened by the alcohol, I leaned towards her and said, ‘Shall we go back to the hotel room and …eh … relax?’
‘What do you mean?’ she replied, the smirk on her face divulging that she knew exactly my intention.
I played along with the pretence. ‘I just wondered whether we might slink back to that luxurious room with its king-size bed and indulge in a bit of afternoon delight?’
‘But I’ve already eaten dessert,’ she said, her laughter indicating that the charade was over.

Even for an intimate partnership spanning in excess of 30 years, there is something excitingly illicit about the prospect of rumpy-pumpy in an unfamiliar hotel room. We were tearing at each other’s clothes before we had crossed the threshold.

Minutes later – I’d like to say hours, but that would be fibbing - Mrs Jones was riding the crest of a wave, in the superior position, with us both accelerating to the point of no return, when there was an intrusive rat-a-tat-tat on the door. We both froze. After a few seconds Mrs Jones dismounted, covered her dignity with the complimentary hotel dressing gown and strode to answer the door, leaving me on my back, hands behind my head, with the smug look so characteristic of a bloke who knows that his manhood will stand to attention for the foreseeable future. Mrs Jones opened the door a few inches, and I listened to their conversation.
‘Would you like me to turn down your bed?’ asked the young hotel maid, in her east-European accent.
‘You’d have more than the bed to turn down if you went in there.’
‘Sorry? I’m here to turn the bed down.’
‘It will go down in its own good time.’
‘Pardon?’
‘Nothing – we’ll be ok thanks; we’ll turn it down ourselves.’

I will never forget the huge grin on my beautiful wife’s face as she shut the door and turned back towards me.